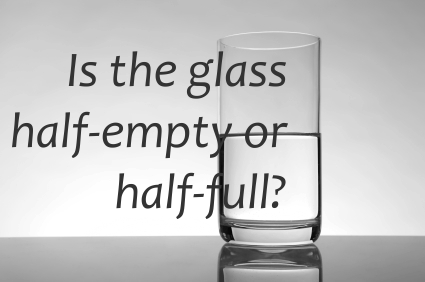 As humans we encounter challenges on a daily basis; circumstances continue changing from good to bad, or bad to good – which creates both positive and negative emotions within us. Life is like a never-ending roller-coaster ride, bringing with it ever-changing ‘highs and lows’.

The lows may drive us to become despondent, pessimistic and lethargic if we are unable to remain positive and optimistic. How we view the challenges before us determines the state of our own world. We could become weary, unenthusiastic and cynical or develop a positive, optimistic and constructive attitude, to all that happens in our lives. We control our attitude, whilst our attitude controls our lives!

What is a Positive Attitude?

A positive attitude does not necessarily mean disregarding or ignoring bad situations; instead, it means remaining confident, active and optimistic that there is Divine wisdom in all that happens in our lives, even though we may not always be able to comprehend the wisdom.

A positive attitude entails having the will to find opportunity in adverse conditions and having confidence in your abilities. “If we change the way we look at things, the things we look at change. If we adopt a negative attitude, all things around us seem depressing, discouraging and frustrating. If we adopt an optimistic attitude, we attract positive energy which gives us hope, self-confidence and courage…”

We don’t see things as they are; we see them as WE are.

Steps towards a positive attitude are:

Positive people do what is humanly possible, placing their trust in Allah and not in their endeavours. Negative people sit back, believing that they do not have what it takes, and wallow in self-pity, inaction and in victim-hood. “I am as My servant thinks of Me…” (Bukhari) Allah will treat you as you anticipate of Him. Ibn Hajar explains this to mean, “I am able to do whatever he expects I will do.” [Fath al-Bari]

You will never know how strong you are unless adversity strikes. It is through hardship that we grow to become stronger, better and wiser. Hardship shapes our courage and perseverance. It is from the womb of adversity that prosperity is born; victory comes with patience, and difficulty is followed by ease. When you choose to give in to the negativity, pessimism, and doom-and gloom, you are not only submitting to a loss of control and potentially wallowing in unhappiness – you are missing out on an important opportunity for growth and development. “The strong believer is better and more beloved to Allah than the weak believer, although there is good in each. Be desirous of that which will bring you benefit, and seek help from Allah and do not give way to incapacity. If something happens to you, do not say, ‘If only I had done such-and-such.’ Rather say, ‘This is as decreed by Allah. He does what He wills.’ Otherwise you will open yourself up to the action of Shaytaan.” (Muslim)

Negative people often view themselves as powerless victims whose lives are controlled by external factors. “Reactive people are often affected by their physical environment. If the weather is good, they feel good. If it isn’t, it affects their attitude and performance. Proactive people carry their own weather with them.”